As the title suggests, I'll be working here with the Twitter Search API, to get some tweets based on a search paramenter and try to analyze some information out of the Data received.

For the purpose of working with the Twitter API, I'll be using the "tweepy" library in Python (http://www.tweepy.org/), which makes it a lot easier to access and use the Twitter API.

I have added comments throughout the code (wherever required) so as to make it easier to understand. I'll be using "pandas" library in Python (http://pandas.pydata.org/) to convert the returned JSON format into a DataFrame to work on it and analyze it.

I am using the IPython Notebook Server on AWS, which I created in my last post.

1. First step would be to import the required libraries. We'll be needing three main libraries - "tweepy", "pandas" and "matplotlib.pyplot".
"tweepy" is used to access the Twitter API; "pandas" is used to analyze the data received; and "pyplot" is used to plot the analyzed data, so as to make it easier to understand.
2. I'll also use a short line of code to make the graphs/plot look a bit prettier than normal
3. Now its time to go to apps.twitter.com and create a new app and get the consumer_key and consumer_secret key from that app. You can search online if you have any difficulties in doing so, but it is a very straight-forward process.
We will assign these keys to respective variables for use, and also connect to the Twitter API using these along-with "tweepy".

4. Now we will perform a Search operation on the Twitter feed to get some data. For the purpose of this tutorial, I am going to search for "#Oscars2015" as it was a most recent and very popular event which many people tweeted about throughout the World.

5. The next step would be to study the data in one tweet so as to see its type and check out what all information can be used to generate some analysis
6. I have not displayed the output above as its a lot of information which is returned regarding one tweet and I want to save space. Its pretty easy to understand though.
Each tweet is in JSON format, and there is a lot of information about the author of the tweet, the text of the tweet, the location, etc.
Its always a good idea to go through the data once to understand it and then try and utilize it for analysis. At least that is what I tend to do.
Now we know the data of a tweet, and so we can get a good amount of data to use it for the purpose of analysis. For this I'll download first 5000 tweet based on the same search query (#Oscars2015), as it was one of the trending topics on Twitter. I'll make use of the "tweepy Cursor" for the same.

7. Now I have my data, but as it is in JSON format it will be somewhat hard to utilize for data analysis. We have to separate out only the data which is required for the analysis.
To do so, we'll use the pandas library of Python. This is one of the most handy library's for a Data Scientist/Analyst, as it helps in representing data and also analyzing it in a sophisticated and user-friendly manner.

8. Let's verify our data-frame by getting the first 5 and last 2 records in it

9. OK, now we have our data in an organized and easy to understand way. Its time to look at it and do some cleaning operations.
This step is required so that we only use valid values/records in our data and neglect the invalid values/records as they don't have any significance and also so that they don't have any negative impact on our results or analysis
While going through this data-frame, I saw that there are some values in the column 'userTimezone' which corresponds to 'None'. I have planned to use this column to see the Time Zone, where people were most active on tweeting about the 2015 Oscars. For this, I have to first remove the records with 'None' values in it, as they are not at all useful for me.

10. We can see that after removing the records with the 'None' values, I am left with 3376 records, out of my initial 5000 records.
These records are valid ones and we can use them for our anaysis.
The next step will be to count the number of tweets in each Time Zone, which can be done using the following one line of code (that is the beauty of "pandas") 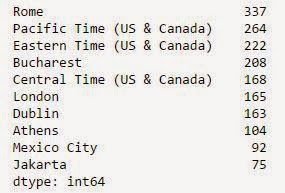 11. Here i am only using the top 10 timezones, so lets slice the data-frame to get only the first 10.
Now I have my top 10 Time Zones from where the most number of tweets were generated for Oscars 2015 (based on the 3376 records which were remaining from the initial 5000 records, after cleaning). These top 10 are shown in the table format above. But a table is not always a good way of representing data, so we'll plot this data on a bar-graph to make it more presentable and understanding to the users 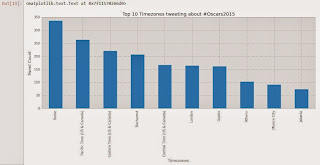 From the graph above, we can make out that most number of Tweets about the Oscars 2015 were generated from the time zone of Rome(Central European Timezone), which was followed by Pacific Time(US & Canada) and then by Easter Time(US & Canada).

This is good to know as we can see how much active the people are in Europe about the Oscars. Even more than the Time Zone in which the Oscars Ceremony took place, i.e., Pacific Time.

It is also kind of surprising to me, because I thought that the Hollywood Stars would be still posting tweets, even when they were attending the Oscars Ceremony to keep the media and their fans updated about it. But I think the people in Rome/Europe are more excited about Oscars, even more than the Hollywood itself... ;)

This was just an attempt on explaining how to use Twitter Search API with python and
perform some Data Analysis. I just took "#Oscars2015" as an example, but you can try with something different and more useful.

Feel free to drop any comments or suggestions or any other topic which you might want me to write a post on and I'll try to answer it asap.

Did you know me?